Awareness raising campaigns create platforms for individuals to amplify their voice. It is an important way to initiate dialogues about and to find solutions for issues like climate change and ecosystem degradation. Recently, Partners for Resilience (PfR) partner SEEDS India contributed to the organisations of a human chain in Bihar, India. The event turned out to be a huge success; more than 10k people joined the event. The past few years, many other PfR partners have organised awareness raising campaigns as well. In this blog post, we shed light on different campaigns in which PfR partners SEEDS, UNNATI, Wetlands International and the Partners for Resilience in Kenya were involved. 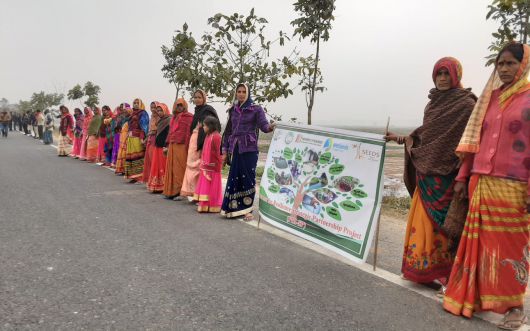 SEEDS: A human chain to spread awareness about social concerns

On January 19 2020, SEEDS supported the organisation of a human chain (a concept introduced by the Government of Bihar) to spread awareness among people on social concerns like climate change, child marriage, dowry system and drugs addiction. The human chain was part of Jal Jeevan Hariyali Abhiyan Mission, which is a three-year mission aimed to renovate and identify ponds and other conventional means of water conservation. This mission is launched by the Chief Minister of Bihar, ShriNitisch Kumar.

The team of SEEDS played a vital role in mobilising 250 disaster task force  members comprising of local champions who voluntarily came forward to be a part of the task force and 200 members of the Panchayati Raj Institution (rural local self-government members) and made them aware about the Jal Jeevan Hariyali Abhiyan Mission and the importance of participation in the human chain.

More than 10,000 people in Bihar intervention area of  Partners For Resilience joined the human chain. The participants took, amongst others, oath for the conservation of ecosystem services. The event brought awareness on the importance of healthy eco-systems. and people were willing to step forward and provide their support to spread the message. To learn more about such campaigns visit SEEDS. 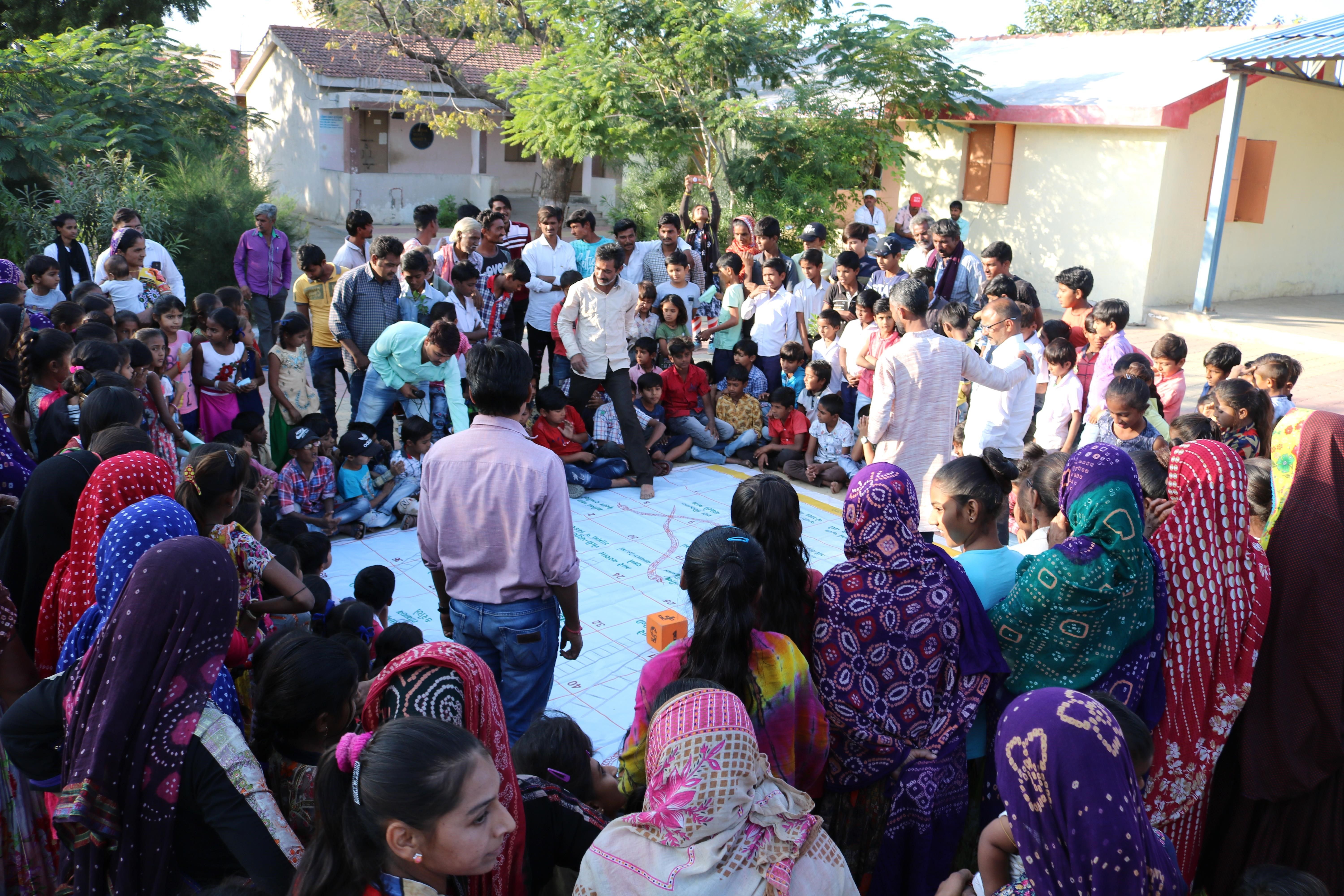 Over the years, there has been decreasing ownership, access and equitable rights over the common property resources (CPR). CPR are the land, water and forest resources which have always been providing the communities livelihood, health, culturally and aesthetically. Keeping this in mind, as part of the overall risk informed development initiative, a five-day awareness campaign on revival and management of the CPR was organised in 5 Gram Panchayats (villages)of Bhachau, Kutch.

The campaign brought the communities together and helped facilitate a dialogue over the loss of ecosystems. A major impact of the campaign could be that for the first time in a very long time, the community talked on these issues. The Panchayati Raj Institute (local elected government member) members engaged with the community with enthusiasm and pledged to address the raised concerns together. To learn more about the campaign and the achievements, please read the blog by Aditi Sharan (PfR partner Unnati). 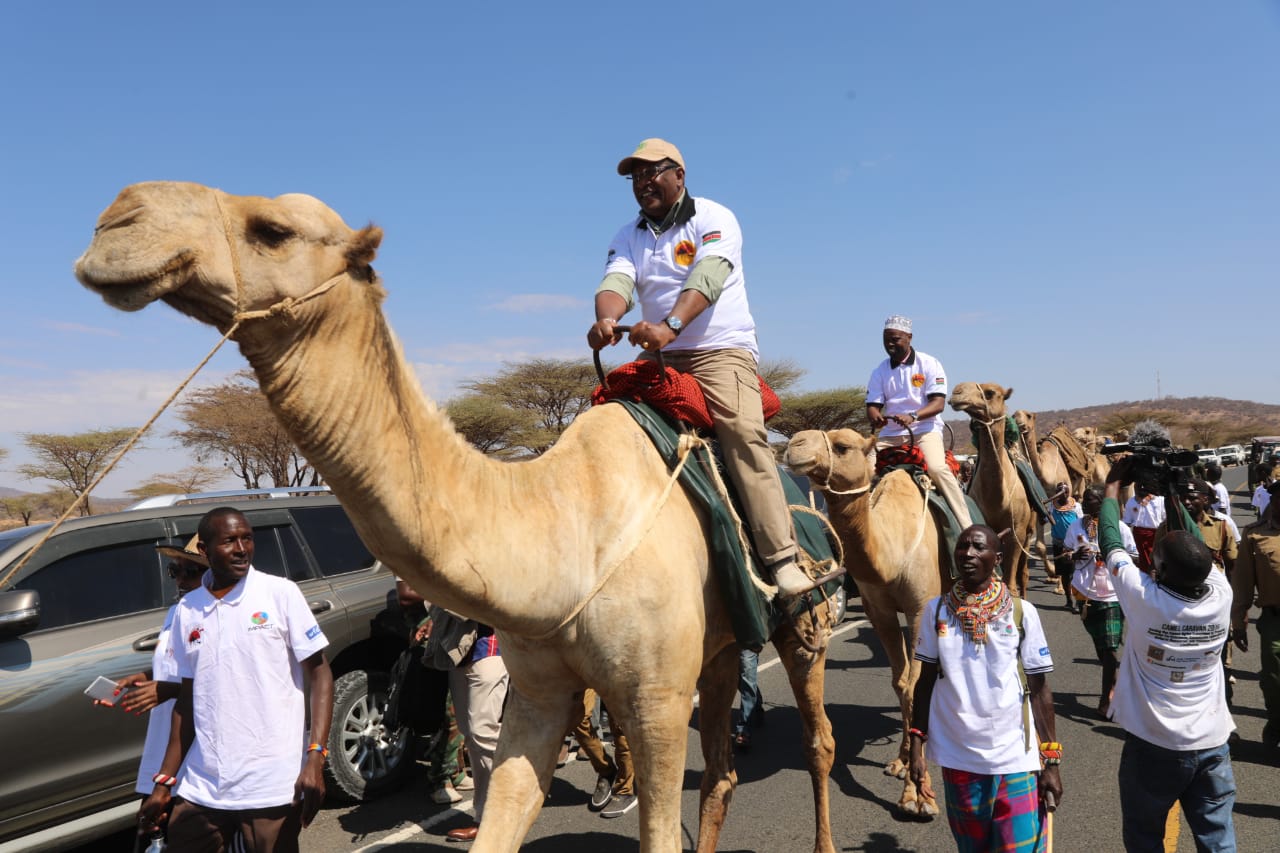 The bottom line of the caravan is to promote conservation of the fragile ecosystem along the  Ewaso Nyiro Baisn. River Ewaso Nyiro serves 10 counties supporting a population of 3.6 million people. The issue of drought and climate change basically affects the waters of this crucial river where at times there is scarcity and excess at some seasons.  During this campaign, volunteers have been trekking with their camels for six days through the wilderness, spending nights along the river targeting nearby villages and town centres basinin an effort to draw the attention of the authorities to put in place measures aimed at protecting the Ewaso Nyiro Basin. Through the support of PfR, the Camel Caravan has been held every year since 2014.  In 2019, around 200 people participated. This included several CSOs  private entities, two members of parliament from Isiolo County, County Governments and representation of National Government led by Environment and Forestry Cabinet Secretary Keriako Tobiko on the last day.

The caravan has become a platform where communities can amplify their voices and concerns.  At the completion of this year’s six-day trek, PfR saw communities addressing the Environment Cabinet Secretary Keriako Tobiko boldly on how they would wish River Ewaso Nyiro being protected. They have taken conservation of this crucial water source as their duty.

Learn more and read the publication about the caravan. Watch the video about the Camel Caravan 2019 here.

We thank USAID, FHI 360, Peace link, The Christensen Fund, Mecry Corps, WFD, Sarova Hotel (private sector), County Government of Isiolo, Laikipia and Samburu, NDMA and many others for their kind support in organising the caravan.