Since September 2018 PfR alliance partner Cordaid has partnered with the HIPADA Network, the Hinatuan Passage Development Alliance, in capacity building in Integrated Risk Management. The Hinatuan Passage is composed of seven municipalities and one city in mainland Surigao and shares the ecologically important passage/channel along its coastal Barangays. 98 out of the total of 149 Barangays or 65% of the Barangays are coastal. The province has a poverty level of 26% (2015), but this hides inequality within the regions where economic activity is thriving in the northern municipalities of Siargao Island as a result of a flourishing tourism development, whilst poverty is as high as 73% in Gigaquit municipality. The province has experienced typhoons, massive floods, tidal waves and storm surges, and earthquakes in the past, and has a heavy dependence on natural resources, fishing, agricultural activities and mining of primarily nickel and chromite significantly, impacting the health of ecosystems and the services they provide to the communities of Surigao Del Norte. Climate projections for the region indicate increase in sea level rise in low lying coastal zones, reduced rainfall and increased temperatures and increase in intensity of storms and typhoons[1]. The province is recognized at one of the eight most vulnerable provinces in the Philippines as a result of low development indicators and high climate exposure.

Following exchange and learning by HIPADA network with Cordaid partner region in Guiuan, Eastern Samar, HIPADA recognized that the Guiuan model and the development of a Climate Change Adaptation Framework - the CCAF - was a powerful tool to facilitate integrated analysis of municipal capacities and resources, vulnerabilities, climate and human induced hazard impact, with strong verification and engagement of communities and CSO actors as well as Local Government Units. HIPADA felt that the biggest gain in the approach was the ability to generate local ownership of a strong framework to enhance development, climate and disaster management planning. 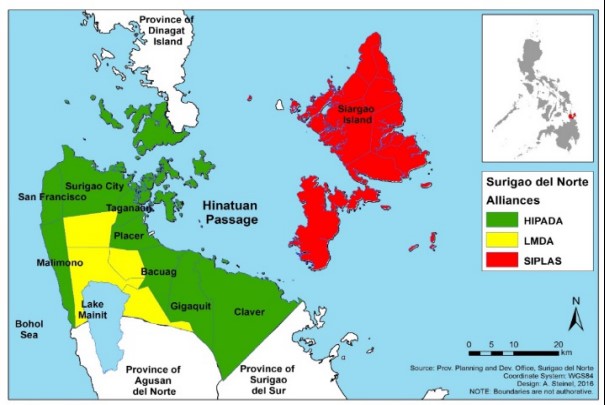 Cordaid with HIPADA network agreed to pilot capacity building in engaging communities and local actors in developing a climate risk analysis based on local capacities and resources, initiate mainstreaming in development planning and institutional development of the HIPADA to be able to expand the approach across their own network.

Through this first phase of capacity building, 2 municipalities, Gigaquit and Claver which share a river and watershed system have implemented a Climate Risk Assessment of their municipalities, gathering baseline data in all 27 villages, from the upstream, forested watershed to the mangrove edged coastal estuaries. This was used to review capacity, vulnerability and climate and human induced hazards to analyze risks. At the same time two Integrated Risk Management interventions were implemented in villages in the lowlands of Gigaquit to address conflict mitigation in the management of natural resources through diversified and sustainable ecosystem-based livelihoods. These serve as a basis of evidence-modeling community driven solutions. The project seeks to support local actors in the two municipalities to development a shared strategy for Integrated Risk Management as a basis of preparing to expand practice beyond the target villages.

Learning with the two municipalities in February 2019 on their efforts provided valuable insight on the important contribution of community engagement in assessment, analysis and planning to tackle risks, and the importance of a landscape and shared ecosystem- based approach to risk proof development planning.

In March municipal wide consolidation and projections will be further analyzed as a basis of initiating the development of the climate change adaption framework between Gigaquit and Claver municipalities.

Looking Forward: clear evidence is already emerging that the process needs to result in agreements between the two municipalities to implement a study or research on the current conditions in the shared watershed, water, soil, ecosystem functioning and impact of human induced hazards and climate projections; with recognition that strategies need to include restoration and protection of mangrove buffers, alternative livelihoods in coastal zones, strategies for protection of watershed and enhance water management in the flood plains. Cordaid through the Partners for Resilience program will continue to work with HIPADADA, Gigaquit and Claver municipalities in development of the IRM strategies. Planning is under-way to prepare other municipalities in the HIPADA network to expand the approach in 2019 and 2020 based on the capacity building efforts achieved to date; it is hoped that IRM will be applied through the entire Hinatuan Passage.

In Alambique village, crab fattening with the village fisherfolks association is seeking to provide alternative livelihoods. Everyone in the village fishes for food security and income, fishing days are variable, on a very good day a fisherman can earn 3,000 pesos (50 Euros), but the average is 300 pesos a day (5 Euros) with many days of no earning when the big storms and winds impede fisherfolk ability to take their small boats to the seas. The establishment of model crab fattening facilities allows for up to 50 crabs to be grown from crablet to maturity, over a period of 20 to 40 days, and once mature a crab can fetch up 1,300 pesos (25 Euros) per kilo from local traders. With mature crabs harvested after they reach 900 grams, constant cycling of crabs growing in the containers, and sharing between the 50 families in the fisherfolk association of Alambique village we hope this will become a safety network for at least 250 people in the village, as an alternative to bad fishing days.

Deep in the mangroves and nipa zone along the coast of Gigaquit lies the village of Anibongan where all families depend on Nipa for the their primary livelihoods activities. Nipa wine, a specialty of Gigaquit municipality, is produced through a process of harvesting Nipa sap, fermenting, distilling prior to being sold to local markets. Traditionally the process of distillation requires the burning of mangrove wood, villages dependent on the Nipa and Mangroves whilst destroying the natural resources they depend on, the local government tries to enforce a no cut policy for the mangroves as the largest swath of mangroves in Surigao del Norte, but they also realize that approximately 60% of the entire population of the municipality is cutting and burning mangroves in pursuit of wine producing livelihoods activities. In Anibongan alone, households earn between 4.000 to 8.000 pesos (65 to 130 Euro) per family per month from Nipa wine production, secondary livelihoods activities in the village include producing Nipa weave roofing, and rainfed rice production. HIPADA in cooperation with Anibongan Farmers Association innovated with the use of rice husk or hull fueled distillation processes which has enabled 80 people to enhance mangrove protection through alternative production techniques. The community recognize the local innovation provides incentives to local wine producers by lowering the economic and environment cost of production, new techniques allow households to produce more nipa wine, find the approach easier, especially for women to use with no heavy lifting of mangrove wood, the carbonized rice husk will be used as fertilizer on the rice fields. They feel they no longer need to cut mangroves to sustain their livelihoods. Both Gigaquit and Claver LGU are planning to replicate this innovation to reach more communities involved in wine production in the mangrove areas of the municipalities through government investment. These livelihood options represent the emerging strategies to respond to risks faced in lowlands communities in Surigao del Norte.