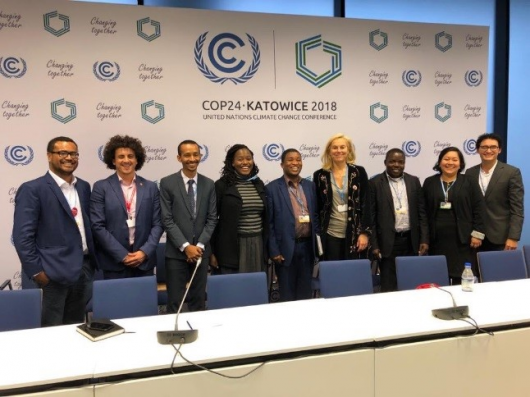 Partners for Resilience engaged in several events, negotiations and meetings where we reminded parties that a robust, transparent and equitable Paris Work Plan should be the only acceptable outcome. Together with the Ministry of Foreign Affairs of the Netherlands PfR/ Care led a meeting of Southern leaders with the Dutch Minister for Foreign Trade and Development Cooperation, Sigrid Kaag, to address the role of the Netherlands in relation to the fight against climate change.

A frank exchange of information has taken place, where the official points of view of the Dutch government were shared and positions and opinions of civil society organizations were heard. Some key highlights of the meeting:

Gender: It was stressed that it is of crucial importance to work with local civil society groups and communities, especially women’s groups. This is to make sure that climate finance will reach the most vulnerable communities and that specific skills and views of women and girls must be taken into account, as well as the necessity of women to play a role in the policy making process.

The Minister shared her concerns about the shrinking space for civil society and said this should be protected. According to her, leadership should come from all, including civil society organizations where the women should play a decisive role.

Finance: The position of most CSOs on this topic was the lack of ambition on climate finance and the current tendency to strengthen investments on grey infrastructure and mitigation, while Nature Based Solutions and community adaptation have been underfunded. Minister Kaag spoke about the New Dutch Climate Fund that would prioritize 65% of the funds for adaptation and highlighted the fact that incentivizing adaptation action is important. She explained that livelihoods and adaptation are also critical to fight climate change and that she is looking for champions in adaptation.

Southern leadership: While it is clear that the Minister is worried about the shrinking spaces for civil society organizations, both in the global north and the global south, it is not yet clear what Southern leadership means within the Dutch International Cooperation Policy. The Minister made an invitation to Dutch partners and CSOs to support the Ministry in defining this.

Looking back at a very fruitful meeting during COP24, we applaud the involvement of Minister Kaag and her willingness to talk to our partners. As Partners for Resilience, we are ready to support the battle against climate change!