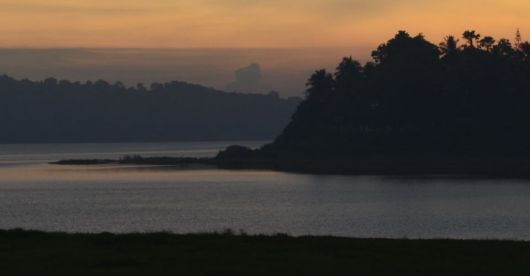 The beautiful southern India state of Kerala was devastated by unprecedented floods in August 2018. The scale of damages is staggering – as many as 0.2 million people were rendered homeless, over 10,000 kilometres of roads damaged, 2.8 billion US dollars in economic losses, nearly 500 lives lost, not to speak of immense stress and trauma such events can bring.

One may wonder what went wrong in the ‘God’s own country’. The inundation maps released by European Space Agency and Wetlands International South Asia’s work on wetlands for over a decade in the state might have some insights to offer.

In physio-graphic terms, Kerala can be broadly divided into three stretches. The low lands comprise of the coastal plains located in elevation below sea-level to upto 8 m, houses significant settlement areas and interspersed by a chain of backwaters and lagoons. The narrow strip of midlands, at altitudes between 8 m and 75 m amsl, is where much of agriculture and plantations are located. The highlands, wherein elevations rise upto 2,700 m amsl are where the forest are, significant parts of which have been converted into the plantation.

The wetlands located in the lowlands have been the buffers for the state which is endowed with abundant rain, nearing 3,100 mm (as compared with the all India average of 1,200 mm). The rivers of the state have over long periods of time built highly productive floodplains along the backwaters. Till the 18th century, the estuaries were fringed with mangroves which buffered against coastal erosion, supported diverse habitats for numerous plant and animal species, and were highly productive fishing grounds and an essential mode of inland navigation. Rice paddies were cultivated in marshes. However, inundation and salinity were crucial constraints. Then came an era of rapid conversion of wetlands for agriculture and settlements. 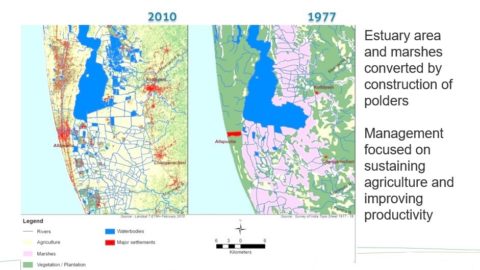 Crisscrossing dykes built in Kuttanad were meant to drain water, and enable rice cultivation for as many as three times in a year. The natural shorelines of significant estuaries were converted, encroached upon, and in-flowing rivers recklessly mined for sand. Nearly two-thirds of Kuttanad is presently under agriculture. Ashtamudi estuary has shrunk by one-fourth in last four decades. The wetlands have become shallower.

Reservoirs as Idukki, which is at the centre stage of post disaster analyses, are categorised as human made wetlands. These wetlands are meant to moderate flows, through carefully planned barrage operation rules support by flood forecasting. When all five gates of Asia’s largest arch dam were opened, one stands to question whether the role of wetlands as moderators of water regime has been taken into account in water resources planning.

When the water gushed downstream, the natural destination is towards the wetlands, albeit, which had now been encroached upon, and had reduced water holding capacity. The areas wherein wetlands reclamation had been most significant were also the ones to bear the severest of the impacts.

As measures of urban reconstruction and flood risk reduction are being identified and implemented for Kerala, it is essential that the role of wetlands is brought to fore, and integrated as “ecosystem-based solutions”. Kerala leads the country in capacity building and empowering of Panchayat Raj Institutions; these need to be capacitated on “ecosystem-based solutions”.